How many of you out there think the Manchester Pacific Gateway project is going to block all the Western water views for the condos looking West today?  Based on what I'm hearing from condo shoppers and some other Realtors is that its ALL going to be blocked.  Seems no one has any interest in buying a condo with bay views over those parking lots that are going to be developed because they, like buyers from years past, fear the worst with new construction.

If 30% of your water views get obstructed did you lose all your view  OR said another way You will still have 70% of your water view preserved, the latter sounds better for sure.  I know people that had a bay view that included views of the Hyatt hotels and switched to a different condo with bay views but can no longer see the Hyatt hotels and they miss the view of those towers, especially at night.   Seems is possible to say the value of some water views does not go to zero if its obstructed with an attractive looking building.

Based on my calculations the buildings on the Manchester Pacific Gateway project will only obstruct about 30% of the current water views (over those existing parking lots) say from a location in the middle of downtown like the Meridian condos.  In rough measurements, the 8 blocks of that land is about 1,359 feet long running North to South.  There are only 4 high rise buildings going up plus one mid rise that will be in front of Embassy Suites but not any taller.  The width of those 4 high rise buildings is only about 400 feet.  That's right of the almost 1,400 wide strip of land that is being developed only about 400 feet of it will obstruct any views from a high rise East of the project.  To be technical I'm talking 400 feet of obstructions say above the 8th floor of other buildings as the base of the new buildings near the ground is wider.  So remember that when shopping for a high rise condo with views of the Western waterfront, don't be intimidated by the new construction as 70% of your water views should be intact based on the plans I'm seeing today.   Note between these buildings they are opening up the streets that are currently blocked off by this Navy chain linked fortress.  Streets such as E, F and G streets are going to be opened up creating view corridors plus the set back each building has from the street, as you visualize that I hope you can begin to see these huge openings between the towers creating bay view corridors. 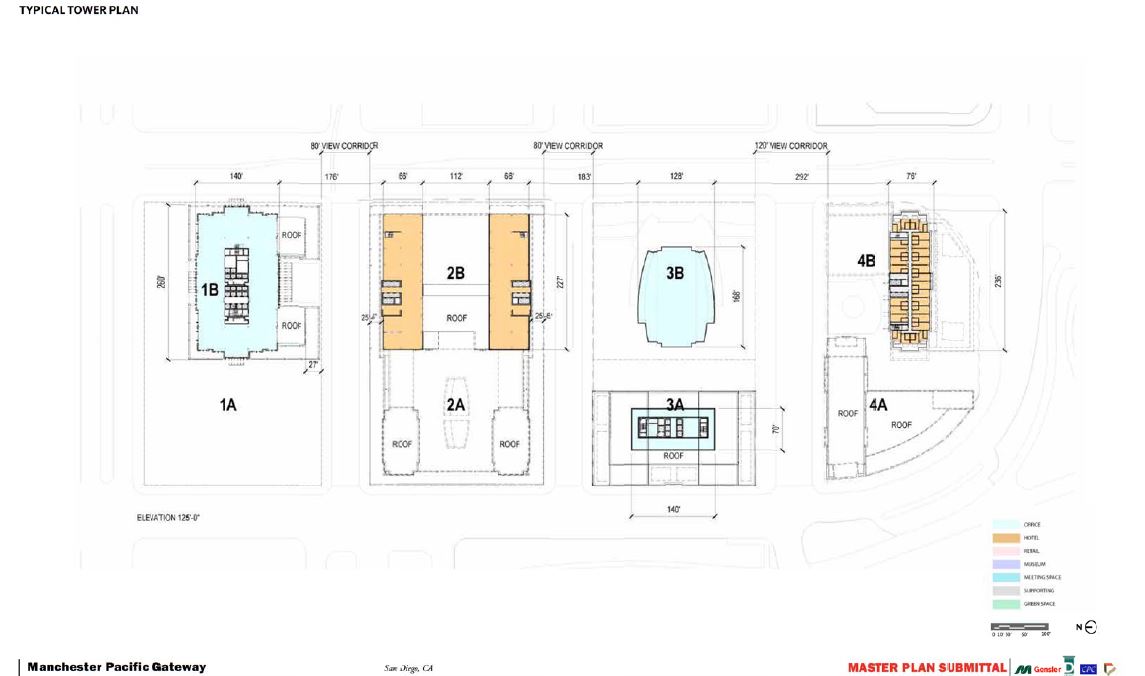 Here is a real life current example of the impact those soon to be built hotels and office buildings will have on the value of a condo with the obstructed bay views.  Before Pacific Gate was built, the most expensive condos in downtown per square foot were the South facing Pinnacle condominiums. Are you ready for this approximately 50% of their bay views are obstructed by hotels, specifically the two Marriott towers and two Hyatt towers.  The sweet spot of these views, is the bay between the hotels, if you measure the distance between the one Hyatt to the far West and the Marriott to the far East it's about 1,600sf and the width of those four hotels as seen from the Pinnacle is about 767 feet or almost 50%.  Whats interesting is that people that live in these Pinnacle units will say they have unobstructed bay views.

Bottom line is it's all about the view corridors and how preserved they will be that seems to matter to people buying these condos.  One could say the smart money already knows this, at the new Pacific Gate condominiums the first floor plan to sell out was the big wrap around West and SW facing plan which will have great views of the water and new hotel and office towers soon to be built.  I'll save the boost in value all the condos along the Western waterfront should get once this $1.4 billion project is completed.